Nigerian singer, Wizkid’s global hit song Essence has become the most searched song on Shazam in the United States, shortly after the remix with Justin Bieber was released.

Essence becomes the first African song to achieve the feat on US Shazam and further establishes Wizkid‘s crossover status. Shazam announced this themselves via their Twitter page on Monday, the 30th of August 2021.

Earlier this month, Wizkid’s Essence hit one million hits on Shazam. This was made known by the music searching app, Shazam themselves, via their Twitter page on the 4th of August 2021 where they announced that the song has reached one million shazam. This tweet got celebratory and hilarious responses as some Twitter users expressed their excitement about the spread while a few Twitter users slammed Wizkid and called the achievement a publicity act that was paid for.

Announcing the new achievement of his song Essence, Shazam congratulated the singer via a tweet on their page. The announced that the song which recently got a remix treatment by American popstar, Justin Bieber had become the most shamazed song in the country. The Essence remix also made it to Wizkid’s deluxe version of the Made in Lagos album. They wrote;

#Essence  is now the most Shazamed song in the United States “ 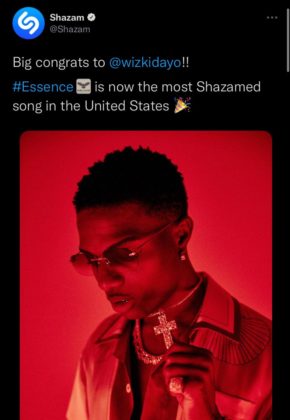 Davido Says Nigerians Hate Him Because Of His Father’s Wealth

Nigerian award-winning singer, Davido has revealed why he gets so much hate on social media.  The music star…
byBellz
Read More

Nigerians spent N7bn in cinemas in 2019

Nigerians spent about N6.97 billion to watch films in the cinemas across the country in 2019. This is…
byBellz
Read More

Controversial singer, Naira Marley believes everything he was taught throughout his years in school is a complete lie.…
byBellz
Read More

Simisola Ogunleye, singer-songwriter, says Adekunle Gold “chased me all over Facebook” before she eventually met him. The singer,…
byBellz