Wizkid‘s international manager, Jada Pollock has been named Billboard‘s Executive of the Week for her work on the singer’s Made in Lagos album.

Announcing this via their Twitter page, Billboard revealed that they were awarding Jada with the title for her exemplary work on Made in Lagos and the subsequent breakout hit that is Essence. Essence has been tagged the song of the summer after an amazing year in which it broke record after record. The song grew so big that it got the attention of Justin Bieber who asked to do a remix and that further raised the profile of Essence.

Billboard wrote on their Twitter page when announcing the new recognition for Jada Pollock;

With the chart-topping success of Wizkid’s “Essence,” his manager Jada Pollock earns the title of Billboard’s Executive of the Week. 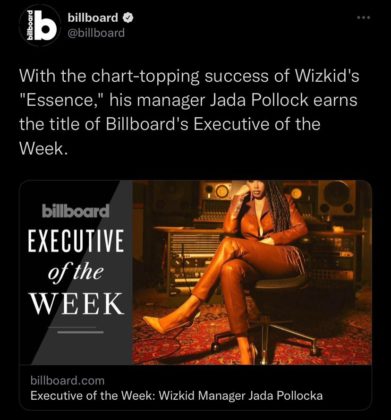 DMW ace rapper Dremo has announced that he will be featuring heavyweights like Vector, Erigga, Kida Kudz and…
byBellz
Read More

Sensational singer, Tiwa Savage has reacted to the coronavirus case that was discovered in Lagos today. According to…
byBellz
Read More

Singer, Selebobo Shares Photos Of Himself Grabbing The Breasts Of A Naked Model || See Photos

Nigerian singer and songwriter, Selebobo has shared some fascinating pictures from his forthcoming video and it’s quite racy.…
byBellz
Read More